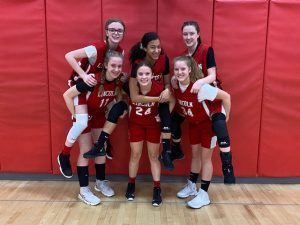 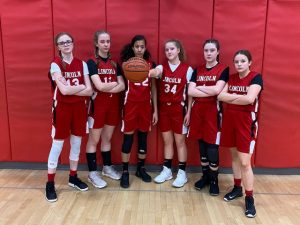 Every school day beginning Monday, January 2 after school until 4:30pm in the Lincoln gymnasiums (with the exception of non-school days). Students are bused to and from away games. A “DECLINE OF TRANSPORTATION” form is required if students want to ride home with a parent from away games.  There is no practice on early release or non-school days.

1/16/18 -V- LONGFELLOW: 7th Grade:  Loss 42 – 4  High scorers:  Bella Brown and Neena Yang.   Girls play hard the entire game, despite being down and overwhelmed. They are excited for their next game at home against Logan.

1/18/18 -v- LOGAN MIDDLE:  8th Grade Girls Basketball Team competed against Logan on Thursday.  The game was close but Logan pulled away after the half.  Players of the game would be Kallie Noble and Cora Hansen, these two girls battled against a girl that looked as if she was six foot tall.  Overall we learned and look forward to playing at West Salem tonight to continue to improve our skills.  Good Luck tonight girls. The 7th grade Lady Cougars unfortunately lost to the Logan Tigers last night. Cameran Trussoni paced the Cougars with a team high 8 points and 10 rebounds. Nadia Nguyen had 6 points while snagging 4 steals. Ava Lillegord gave maximum effort playing hard defense and yanking down 6 rebounds. Keyamonie Thomas was a presence down low enforcing her will while grabbing 5 rebounds. Elliana Wicks led the team with 4 assists. The Lady Cougars next game will be in West Salem on Tuesday, January 23rd.

1/23/18 -v- WEST SALEM:  7th Grade:  Loss 31 – 2  High Scorer:  Megan Anderegg.  Mrs. Hustle: Jenna Schultz. The girls fought hard and tried their best. Despite having a tough opponent, they play amazing defense and got a lot of rebounds. Look them to get back on track when they play Aquinas on Thursday.  Lincoln 8th grade girls battled against West Salem. Although they fell short, the team worked hard and played until the bitter end.  8th Grade Players of the game were Sam Vandermolen and Maggie Hannum.

2/1/18 -v- SPARTA:  The 8th grade B team came out victorious over Sparta last night.  The girls put on a tough 1-3-1 defense and put up some great shots.  Ella Lysne finished with four points and pulled down 6 rebounds.   Kate Wavra was a defensive machine putting pressure on the ball every time it came down the court.  The 8th grade A team fell to Sparta, but scored twenty more points against them than they did last year.  The best part about this group of girls is how hard they play until the final buzzer sounds.  Cora Hansen scored 8 points and pulled down 7 rebounds.  Kayla Holman Scored 5 points and finished with 5 points.  This was such a great team effort.  Keep up the excellent work girls. The 7th grade team was victorious over Sparta winning 26 – 6.  High Scorers were Jenna Schultz and Cynthia Xiong. Mrs. Hustle goes to Megan Anderegg. The girls fought hard and worked as a team to earn another victory. In this one game they scored more points then they have all year. Their next game is against Tomah on Tuesday the 5th.