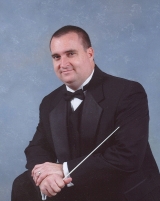 A native of Central Florida, Mr. Harden was employed at Walt Disney World for nearly 15 years, working as a student musician, a Guest Talent Coordinator with Disney Performing Arts, and as a host for visiting celebrities with Walt Disney World Guest Relations.

Prior to moving to Wisconsin, Mr. Harden was the band director at Haines City High School and then Daniel Jenkins Academy Middle School of Technology, both in Haines City, Florida.

He has twice been nominated for the Florida Band Masters Association’s Tom Bishop Award and in 2010 was honored to be inducted into the American School Band Directors Association.

Mr. Harden serves as a board member for the La Crosse Youth Symphony Orchestra and volunteers his time as the coordinator of the La Crosse Area All-Star Band, a component of the Blue Stars Drum & Bugle Corps.

In his spare time, Mr. Harden likes spending time with his wife Carrie, and daughters Isabel and Zoey.

Skyward Access
Canvas Students & Staff
Parents/Guardians
Student Life
School Documents
Staff Directory
Tech Support
Anonymous Tip Report
Activity Calendar
Staff Portal
Staff Login
We use cookies to ensure that we give you the best experience on our website. If you continue to use this site we will assume that you are happy with it.Accept