Logan High is a caring learning community committed to excellence in education. We are rich in history and tradition dating back over seventy-five years, and our graduates, regardless of their location, still consider Logan home.

Welcome to the Logan High School Web Page. I hope you enjoy looking at this work done by Logan staff and students. On this page are some facts about our school. Logan High is a caring learning community committed to excellence in education. We are rich in history and tradition dating back over seventy-five years, and our graduates, regardless of their location, still consider Logan home. Statistics: – Logan High is a two-story building of about 240,000 square feet situated on a 32 acre site in the La Crosse River Valley. – 780 Students grades 9-12 – 75 Teachers — 15 Departments (more than 50% have Masters Degrees) – Annual State Test Scores above state averages – Average composite ACT core score: 22.0 History: -Established in 1929 -New Building Constructed in 1979 Innovative Programs: -CISCO Academy -Project Lead the Way -School Within a School -Youth Apprenticeship -LEAP — Alternative Program -Chinese Language courses -AVID Sister Schools: -Wernher-von-Braun-Gymnasium, Friedberg, Germany -Luoyang Foreign Language School, Luoyang, China 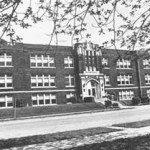 Logan High School is named in honor of John Alexander Logan (1826-1886) Civil War General, U.S. Senator, and founder of the Memorial Day Holiday.  In 1862 Logan fought in all the Western campaigns under General Ulysses S. Grant. He later distinguished himself at the siege of Vicksburg, Mississippi, and served with General William T. Sherman on the march through Georgia. Logan became a major general of volunteers and a corps commander. His soldiers nicknamed him “Black Jack.”  Logan gained fame as a union general and political leader. After the Civil War, he helped organize the Grand Army of the Republic, a veterans’ organization. He is also credited with originating the idea of Memorial Day in 1868.

Logan’s athletic teams are called the “Rangers” in honor of Captain Robert Rogers’ Rangers, a band of American frontier scouts who served with the British Army during the French and Indian War.

Logan Junior High School was built in 1921 at the corner of Logan and Avon Streets. In 1928 an addition was added making it possible for north side La Crosse residents to attend their own senior high school. From 1928 to 1958, Logan was a junior-senior high school, grades 7-12. In 1958 the construction of another school on the same block made it possible to divide the school into Logan Junior High, grades 7-9, and Logan Senior High, grades 10-12.

In August, 1979, the new Logan Senior High School was completed near Swanson Field on Ranger Drive. The new school was a 3-year high school during the 1979-80 school year. Logan High became a four year high school (grades 9-12) in 1980 with the reorganization of the district and creation of middle schools.

Two classroom additions have been added due to increased enrollment. A multi-purpose addition was finished in the fall of 1997, which provides music and athletic practice and performance facilities.

Skyward Access
Canvas Students & Staff
Parents/Guardians
School Documents
Staff Directory
Tech Support
Anonymous Tip Report
Activity Calendar
Staff Portal
Staff Login
We use cookies to ensure that we give you the best experience on our website. If you continue to use this site we will assume that you are happy with it.Accept